From 3D laser cutting to part handling. Can the robot be the solution you’re looking for?

As needs shifts and applications become more demanding, machine tool manufacturers are challenged with the task of how to manage the evolving production changes, thus fostering the development of new technologies including optimization of cutting processes, improvement of material flow, part loading and unloading and better management of part repositioning during 3D laser cutting cycle.

Why use robotic handling in 3D laser cutting

Part repositioning occurs every time geometries to be cut cannot be reached in a single positioning. 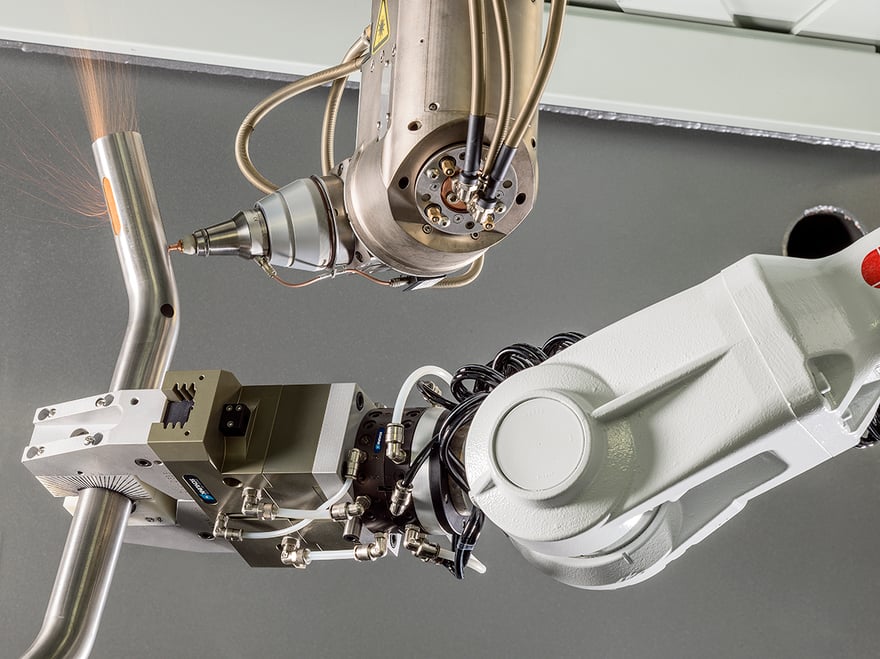 While this type of need is quite rare for deep-drawn or molded parts, it is almost always the case for 3D laser cutting of hydroformed or bent tubes, where trimming, piercing or cutting of geometries along the diameter of the bent tube or on opposite faces of the hydroformed part involve changing the cutting position of the part, also several times, during the same work cycle.

In this type of application, using a robot plays an essential role and brings considerable advantages both in terms of quality and of quantity: 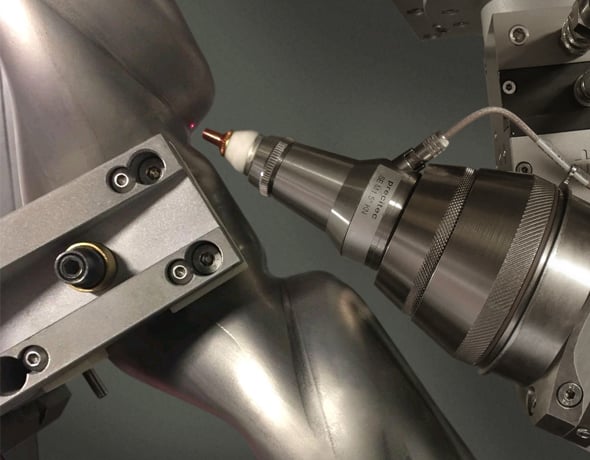 Programming the robot, an aspect not to be underestimated

In a 3D laser cutting system that uses the robot to manipulate the workpiece, it is important that the work cycle programming CAM software also manages the robot movements. The robot must be fully integrated in the system, not only mechanically, but also at software level to allow the entire work cycle to be programmed offline.

This is why it is important to choose a system with a CAM software able to program the entire work cell: laser head, robot and other equipment that make up the 3D laser cutting system.

3D laser cutting means that the head can cut the part a non-perpendicular direction to its surface. This may happen on metal sheets, straight tubes as well as on three-dimensional profiles of any type: deep-drawn, bent tubes, hydroformed, molded, etc.

5 axes are essential for this type of process and in the 3D laser cutting system:

With a robotic laser cutting system there are 6 robot axes on which the cutting head is installed and the seventh axis that allows the nozzle to approach and move away from the workpiece.

Even if both types of systems have been developed for the same purpose, laser cutting of three-dimensional parts has important differences that you should be aware of to make an informed choice:

Degree of freedom means the freedom of movement that the system offers to the laser head. This is an important feature that directly affects part feasibility and productivity of the system itself.

For example, in a robotic 3D laser cutting system, the 6 axes allow the head to cut in vertical position in both directions. 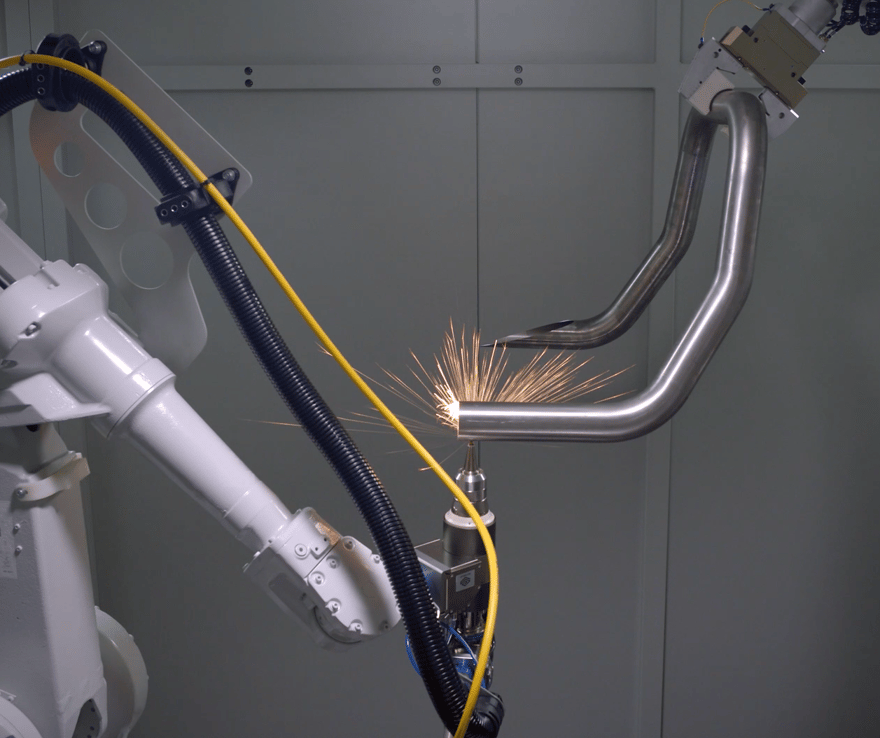 In a robotic 3D laser cutting system, the 6 axes allow the head to cut in vertical position in both directions.

However, it should be noted that the use of a robot to move the workpiece greatly increases the degree of freedom, so in these terms, the difference between 5 or 6 axes is nearly zero.

Amount of the investment

The cost of laser cutting systems similar to those so far described can vary greatly.  The variance is highly dependent on the level of automation, the technologies implemented in the machine, and if the machine is or is not a custom solution.

Custom machines are integrated from standard modules, however depending on the amount of customization, the price can be significantly higher and delivery times longer when compared to standard solutions. A company should consider the time required for design, integration, and testing to determine if a customized solution is right for their manufacturing needs.

Some of these systems, for example, can have more than one robot equipped with a laser cutting head. In this case, the price can easily reach above a million euro.

As a pioneering technology, 3D laser cutting attracts many manufacturers that want to implement state of the art technology into their production.

In order to guarantee the high level of flexibility and versatility of a standard machine (the total control from a single point, offline programming, CAM software, etc.) and avoid the cost for customization in term of money and time, some machine tool producers have created compact and standardized 3D robot laser cutting systems.

Standardized solutions offer a number of benefits because a machine tool producer understands many of the challenges manufacturers encounter on a day-to-day basis.  As a result, their machine solutions include features and functions that streamline the manufacturing process, allowing the user to program offline and start the production quickly. Manufacturing is more flexible, efficient, easier, and faster.  Also, spare part availability and service response is better.  A standard solution means service staff are trained and prepared to support you as needed and parts are stocked.

This kind of solution can represent an advantageous way to step into the world of the 3D laser cutting with a limited investment and with a machine featuring the experience and the technology of a CNC laser cutting system.

Flexibility as a fundamental weapon against Covid-19