Small batches, productivity and automation, Bejot is a Polish family business specialized in the manufacture of office chairs.

In this interview Marcin Durzyński, production and logistics director, tells us about the development of his company from the beginning to today and about the technological solutions implemented in the machine range to positively respond to the market needs.

In order to further develop and meet the growing expectations of his customers in terms of design, quality and ergonomics, he decided to acquire a state-of-the art machine range choosing to buy two BLM GROUP machines respectively for metal tube and wire bending. 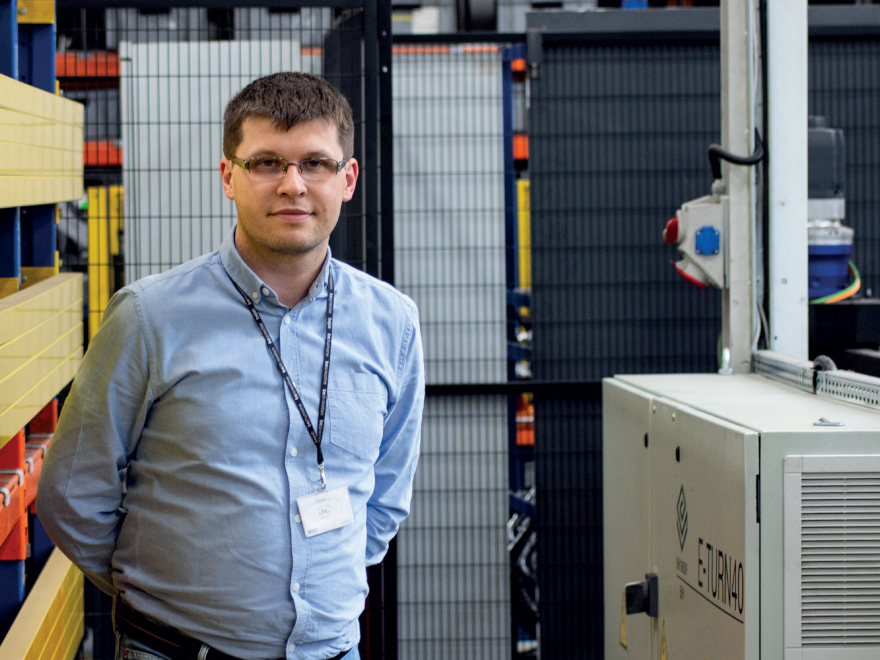 In this rapid business development phase, what were the investments in new machinery you decided to undertake?

We took into consideration a wide range of machines, from the modern cutters to the laser cutting systems.

After the first performance analysis, it became clear that laser cutting was the solution we were looking for.

We started benchmarking on the market, speaking mainly to our partners and to companies with which we are collaborating or that have collections complementary to ours.

Two suppliers remained in the game very quickly, BLM GROUP and another world leader among the manufacturers of laser cutting systems for industrial processing.

The final decision was taken after consulting our partners who had the opportunity to work with machines from both manufacturers.

As we are not experts in this technology, we could only compare the performance and listen to the opinions of the professionals using the programming software for lasertube systems: ArTube by BLM GROUP, has turned out to be far better for the user.

After acquiring the LT-FIBER tube laser cutting system, we implemented and modernized most of our collections for 2 years. 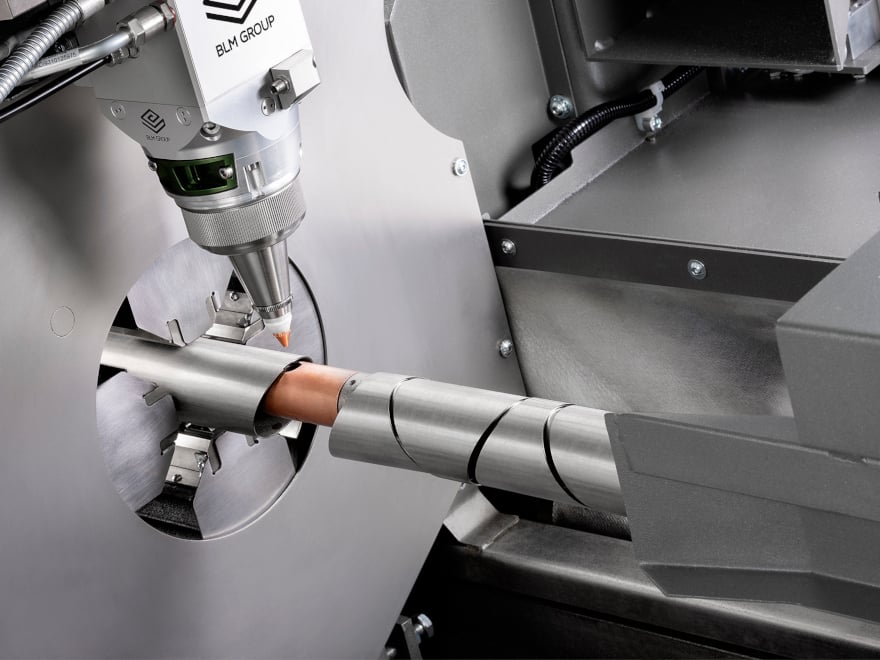 Therefore, we can say that it was a period of investments for your company?

Yes, there were many investment needs on the horizon.

We made an investment in tube bending technology, with the aim of acquiring a machine able to realize any shape and that offered completely new possibilities to our designers and to our research and development department. From here also came the need to bend the tubes on which laser cut joint systems are made, very often impossible to make without an initial investment.

Initially, we tried to carry out this process on the hydraulic tube bending machines we already had. These are reliable machines to manufacture conference chairs, but unfortunately, we soon found out that the feasibility of the parts that could be made due to bending in one direction only and the repeatability of the result obtained were insufficient and could not keep up with the quality introduced by LT-FIBER. 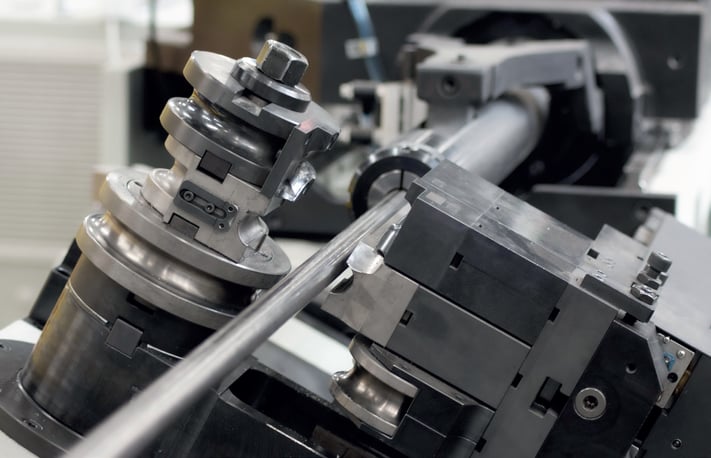 Once again, we started searching and analyzing the machines available on the market, we visited various companies and tested bending on several machines.

From the analysis the E-TURN40 proved to be the most efficient, but that does not mean that it is the most economical at the time of purchase.

The E-TURN40 is an all-electric tube bending machine with right-handed and left-handed in-process bending capabilities.

In the end, what made you buy this machine?

First is the setup time and the post-setup calibration: the block tool system is virtually calibrated only once after purchase. With our wide range of products it is also very important to reduce the time necessary to change production and therefore the bending tools: we produce about 500 different structures consisting of elements in small series.

The second matter in favour of the machine has been the possibility to bend the tube to the right and to the left in the same work cycle: thanks to this, we have reduced the average number of elements that make up the product by bending longer tubes and with more complex shapes. This has allowed us to reduce the number of subsequent machining operations such as welding and grinding.

And in the end, the VGP3D programming software: is easy to understand, use and configure, integrated in a single environment with ArTube combined in the so-called All-In-One system, that allows us to compensate the position of the cutting geometries along the tube to take into account the material deformation following the subsequent bending operation.

Discover how the All-In-One technology works

We found out that you didn’t stop with a tube bending machine, did you?

True, during one of the industry events, our attention was drawn by a double-head wire bending machine able to bend the wire from coil.

After an initial analysis, we came to the conclusion that by purchasing this type of wire bending machine we would have obtained a fourfold reduction of the manufacturing times.

Until then, wire production was based on buying the material already straightened, about 6 m long, but the wire itself is very flexible and difficult to unload and reload. Furthermore, in many cases, we were forced to cut the sections to length, and later bend them on dedicated tube bending machines equipped with special fixtures, wasting time and scrapping a lot of material.

By purchasing a DH4012, an automatic wire bending machine with a double bending head able to bend both from bar and from coil all these phases have been eliminated and we only have to buy a wire coil and load it in the machine.

With DH4012 we carry out cutting, straightening and bending of wire. Furthermore, we also requested to equip the machine with the wire tip chamfering unit to reinforce the weld seam. Moreover, bending the wire on a wire bending machine is faster than on a traditional tube bending machine. 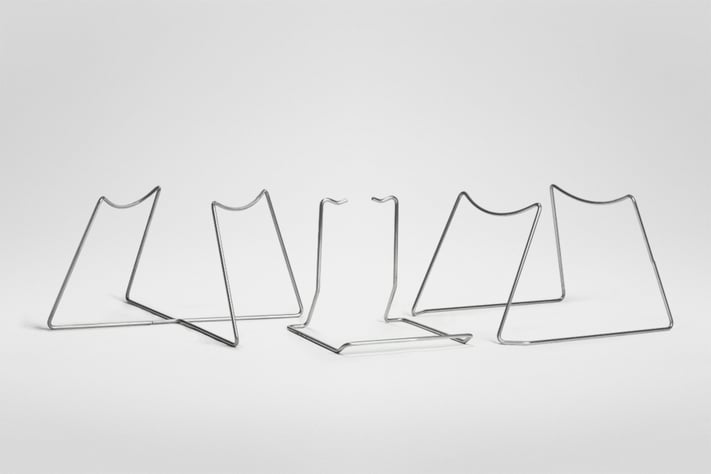 Some of the supports for office chairs made with DH4012 and obtained from an 11 mm diameter wire.

Why a double-head wire bending machine was necessary?

The long overhang wire generates high vibrations during bending at high speed of the single head machine, so the last bends loose accuracy and the whole system is very unstable.

In the double head wire bending machine vibrations for the same dimension are much lower, because the wire is bent on both sides, therefore part repeatability is considerably improved.

As we had already decided to buy a tube bending machine E-TURN40 and as we desired to have a single supplier, service and design environment we asked BLM GROUP.

Their standard offer included a double-head wire bending machine only up to 10 mm diameter: the DH4010. But the diameter was not sufficient and so our company could not use it.

However, BLM GROUP decided to take up the challenge and, on the basis of the drawings of the parts we needed, they made the necessary changes to the machine to meet our needs and allow bending of the metal wire up to 11 mm.

How would you rate purchasing the BLM GROUP machines today?

About 9 months after installation, we are producing all our wire products on this wire bending machine.

Now we have one employee only to carry out a job that used to be performed by four people and it is the same operator working on the E-TUNR40 tube bending machine.

Thanks to the DH4012 we have shortened the production time, reduced the warehouse dimensions to store the wire and we are also saving money because we buy the wire directly from coil.

We have also improved the production accuracy because like the E-TURN40 tube bending machine, the DH4012 is also electric and very accurate, per the BLM GROUP standard.

Did you know that the DH40 is also perfect to bend tubular heating elements of any type? Find out more.

Would you like to tell us something about the origins of BEJOT?

Marcin Durzyński: It all started in a small carpentry specialized in the production of wood accessories, established in 1984 by Jerzy Semeniuk in Mosina, close to Poznań.

After 7 years, its management was taken over by the current managing director: Dariusz Wilk. This marked a crucial turning point with the start of the production of office chairs.

From then on, the most important events have been the participation in the MTP Meble Fair in 1995 and the Orgatec International Furniture and Interior Design Fair in Cologne in 2000.

What led you to success?

In the following years we expanded, we made new investments by building a new plant for product manufacturing and storage and a dedicated office building, and we also obtained the ISO 9001 certification.

Over time, we implemented the ERP information system, that considerably improved the level of service to our customers.

In the following years we built other facilities and obtained the ISO 14001 certification, besides continuing to regularly take part to fairs like Orgatec that considerably contributed to increasing sales and export of our products.

Another important turning point in our history was establishing cooperation with universities, among which the University of Science and Technologies AGH of Cracow and the University of Life Science of Poznań.

Discussions with the academic personnel has taught us a lot and, in many cases, they have been source of inspiration.

Today we are nearly 230 people and on one side we are trying to get the most from the potential and knowledge of our manpower and, on the other side, to make their potential grow. This allows us to progress in product development, in sales and customer assistance.

The decisions taken some years ago about the direction of Bejot development and the collections we offer led to an increase of the basic portfolio of office chairs and armchairs with full acoustic systems, among which are acoustic booths for telephone calls in wide open spaces, or meeting areas for 2 or 4 people.

The high degree of construction complexity resulted in an extension of the unit production time, especially to prepare the single parts for welding.

The decision to expand the models manufactured was right, but the sales increase resulted in unacceptable lead times.

Based on our data analysis, we came to the conclusion that it was necessary to replace part of the existing machine range with new machines that could allow us to meet the production needs.

The importance of software when working on Lasertube