Advanced processes for tube manufacturing, the result of growing demand for increased productivity and above all, flexibility, has led to the creation of systems capable of performing complex and precision operations on pre- bent, hydroformed or shaped tubes. 3D laser cutting technology is playing an increasingly important role in this type of processes.

The link between production, cutting and end-forming

The various technologies that come into play in tube processing are influenced by the physical and geometrical characteristics of the part (diameter, thickness and material), the way it was made, and the production flow.

Below are some key concepts for tube processing, the link between the various processes, the potential problems that this link generates, and the reason why 3D laser cutting can be the key to overcoming feasibility problems.

The influence of the weld seam on tube cutting and bending

The manufacturing technology of a tube has a major influence on subsequent processing, especially on cutting and bending.

There are two main types of tubes according to the production process:

Tubes made by extrusion (seamless) and cut with an LT7 Lasertube system.

The presence or absence of the weld seam greatly influences the response of the tube to deformation. This happens because the welded area is subjected to high-temperature during the process which changes the chemical-physical characteristics from the rest of the tube, and consequently, a different elastic and deformation response to stress.

For this reason, during bending, and also during laser cutting, the weld seam must always be in the same position, so that the tube always responds in the same way and the repeatability of the parts obtained is guaranteed.

The many solutions for tube cutting

Pipe cutting can also be used to make joints, supports or joints between several pipes; applications that sometimes require making complex cutting geometries. In this case, simpler technologies such as a disc cutter or other manual technologies do not always guarantee the required levels of productivity, precision, and feasibility.

This brings other technologies into play, including laser cutting of the tube using Lasertube systems for creating complex geometries even on open profiles or special sections. 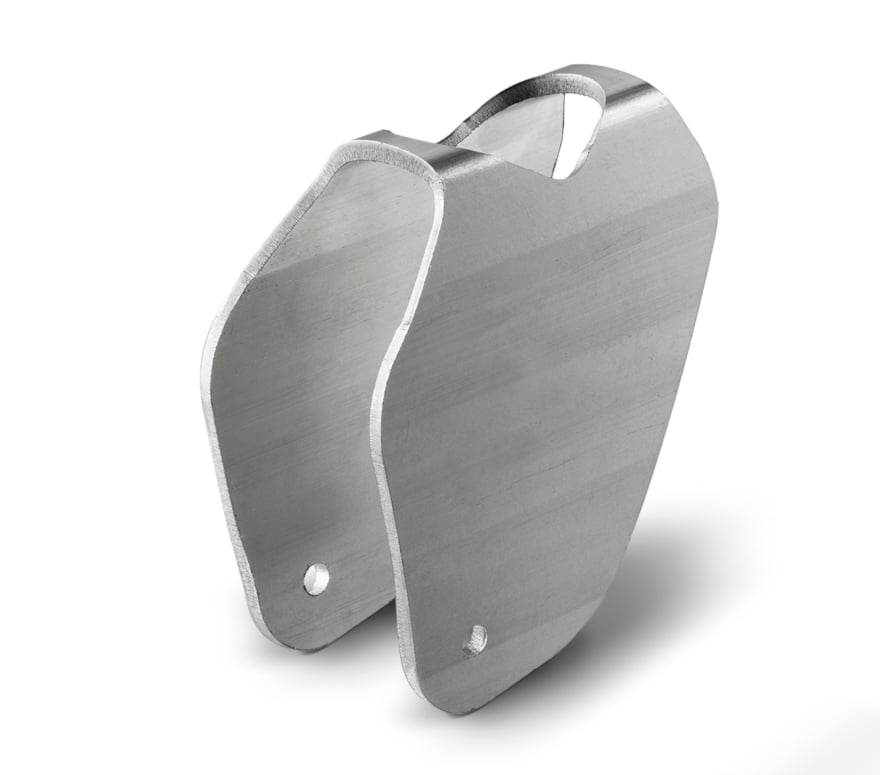 Cutting is just one of the many processes that can be carried out on the metal tube. There are deformation processes, such as bending, shaping, hydroforming, etc., which aim to form the tube to a desired shape without interrupting the continuity of the material.

In bending, one of the main difficulties is the control of elastic return and material deformation. Two phenomena that occur and depend on various factors including the bending technology used, stretching, bending, fixed or variable radius, the material and geometry of the tube, the average radius, and the bending angle.

A bent tube is always subject to an elastic return that causes a slight reduction of the bending angle immediately after machining asl well as two deformation effects: the elongation of the tube and the modification of the tube thickness near the bend. The greater the intrados, the lower the extrados.

To prevent errors on the part caused by these phenomena, there are CNC tube bending machines equipped with programming software able to calculate elongation and elastic return of the tube and make it possible to obtain the first correct part immediately, avoiding rejects and multiple trials.

Furthermore, when cutting to size, if holes and other geometries have already been made on the tube, it is necessary to consider that their position will be altered by the stretching of the material due to the elongation during bending.

Predicting the extent of this displacement is not a simple matter and is generally addressed through numerous attempts resulting in lost time and material. There are, however, laser cutting and tube bending systems capable of interfacing with each other to automatically compensate for the displacement of the geometries resulting from the bending and guarantee that the part is right from the start.

Learn more about this technology

If cutting geometries are specified on or near the bend area, the cutting cannot typically be completed before the workpiece is pre-formed. This is because the shape of the cutting geometry would deform, and in turn, results in a weak area that will impact the strength of the part.

3D laser cutting of bent, hydroformed or shaped tube effectively addresses this problem. This type of process is carried out with 5-axis laser cutting systems or 3D laser cutting robot systems that can follow the profile to be cut at every point of the tube to make geometries that would have been impossible before the forming process.

Learn more about the differences between 3D laser cutting systems

For example, a hole is made right on the extrados of the bend in the bottom of the tube. If the hole was drilled before the bend was made, the tube would not have withstood bending. 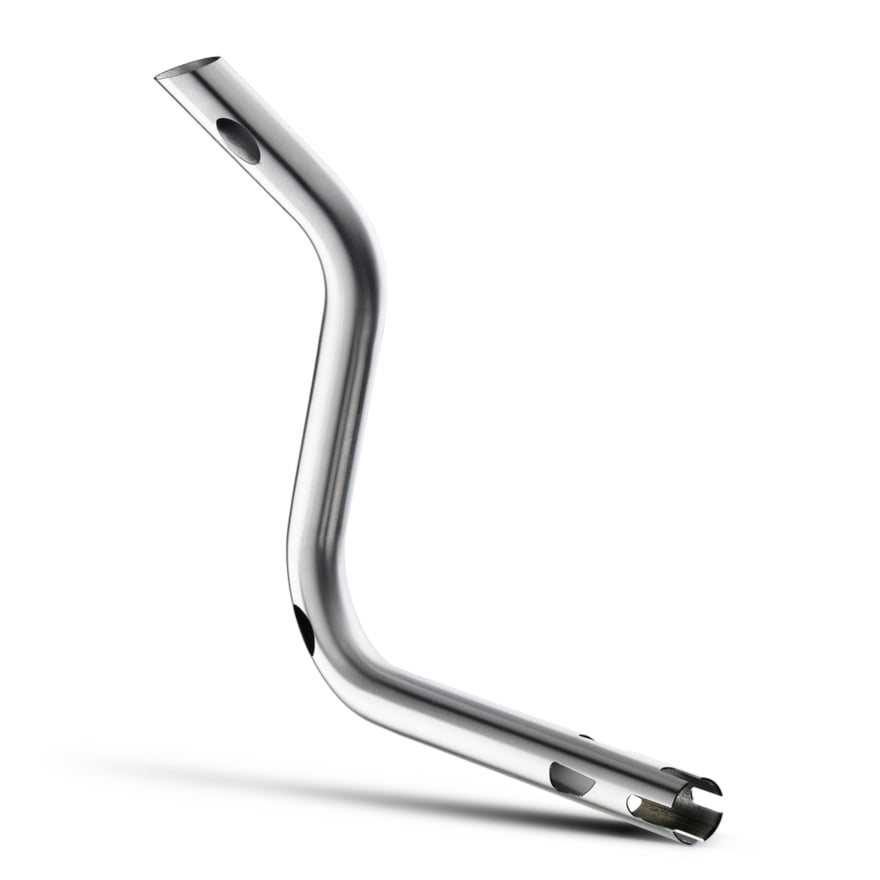 The importance of programming software

3D laser cutting systems need powerful software tools for their programming in order to calculate the movements of the degrees of freedom (at least fives) necessary to follow any three-dimensional path in space. The software tools must be flexible enough to address changes in production volumes; a common occurrence in many industrial sectors.

Learn how to program a 3D laser cutting system

The use of a 3D laser cutting system equipped with software that allows offline programming and rapid set-up of the part is essential to achieve the production flexibility to respond quickly to changing market demands.

Manage the scrap caused by the deformation processe

Scrap is always present after bending, hydroforming or deformation operations, as part of the material is gripped by the clamps of the bending machines or by the press dies. In these cases, waste must be eliminated by trimming.

Since this type of machining takes place around the entire diameter of the tube in its two end parts, the use of a robot dedicated to handling the workpiece is the ideal solution, as it positions the two ends of the tube with the best orientation, so the 5-axis laser cutting head can do the job.

The robot, as a workpiece handling element, is particularly suitable for cutting bent or hydroformed tubes because it arranges the workpiece in a sequence of different positions and allows the cutting head to perform machining operations on any point on the surface in a single cycle.

What other benefits can robot handling offer in 3D laser cutting? 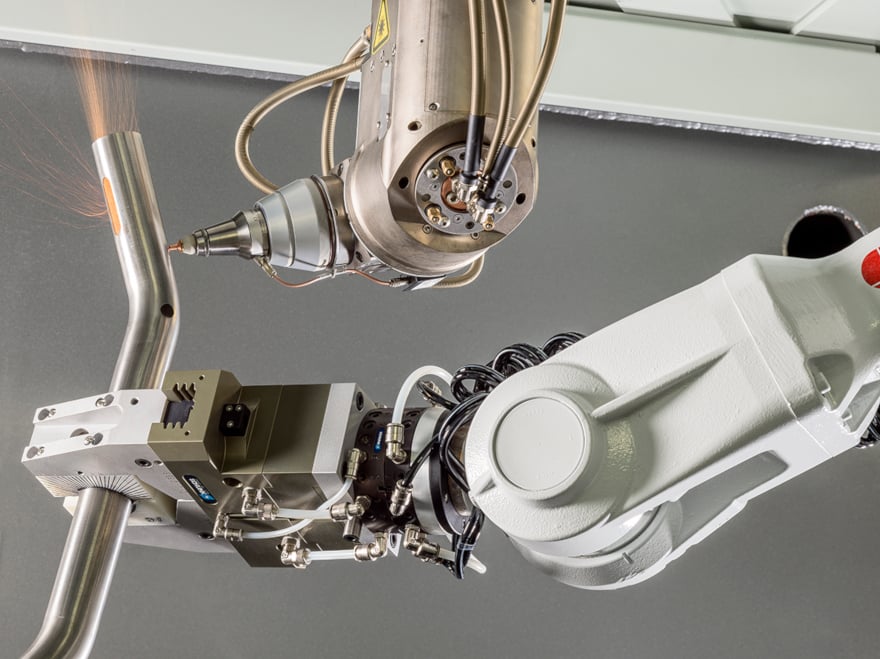 The advantages of 3D laser cutting of bent or hydroformed tubes

The use of 3D laser cutting equipment in the cutting of bent or hydroformed tubes offers important advantages for production: