Laser cutting tube? It's easier than you think!

Progress has brought many benefits, allowing us to move faster and more comfortably with increasingly sophisticated and easy-to-drive cars. Similarly, industrial production has become more efficient and cleaner with automated systems capable of achieving high productivity in safe and sustainable working conditions.

A brief history and origin of machine tools

Machine tools, understood as machines capable of exerting and maintaining the action of cutting, finishing, shaping a material, have accompanied and even supported the evolution of humankind from the earliest times.
Potter's tables turned by the craftsman’s feet date back to the ancient Greeks and Egyptians, but it was not until the 18th century that the first woodturning lathes were made.

At first, they were considered an art and a curiosity, so much so that their use was taught to the rulers of Europe as part of their education. When their use was extended to metal, the first application was – needless to say – in the military field; more precisely for the reaming of cannon mouths. 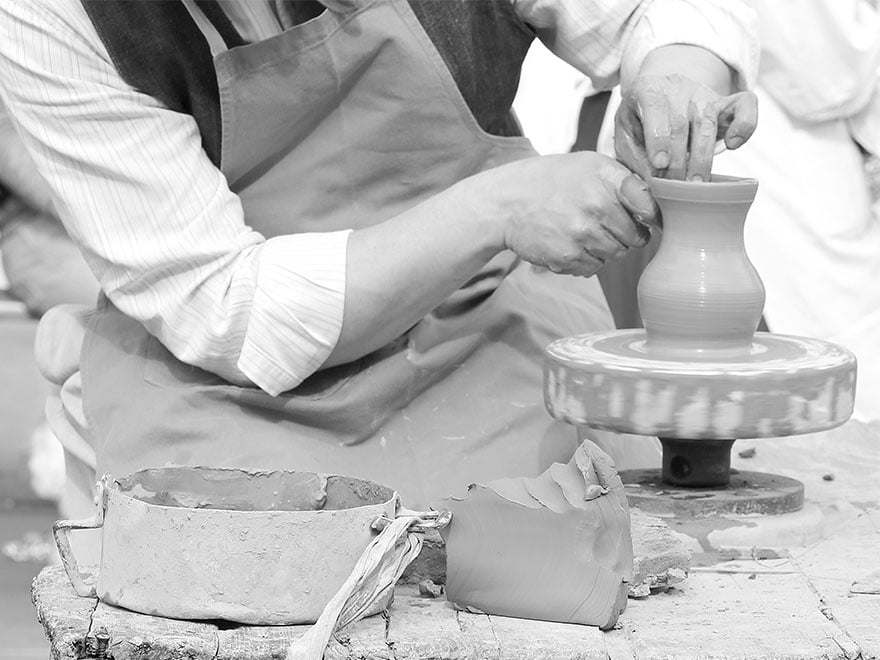 Potter's tables turned by the craftsman’s feet date back to the ancient Greeks and Egyptians, but it was not until the 18th century that the first woodturning lathes were made.

Stock removal machines, as we know them today, became widespread having realized great potential in other sectors and following the introduction of steam as the prime driving force for automated, continuous operation. There were milling machines and screw threading lathes, transfer machines, gear cutting machines and other small machines used to shape brass components for precision instruments (watches, microscopes and scales).

The use of these machines was entrusted entirely to experienced turners-millers until the mid 1900s, when they were joined by technical programmers following the dissemination of computerized numerical control (CNC) systems.

The capacities of the machines increased and with them so did their complexity and the knowledge required to operate them, especially to achieve high-quality results.

Many machine operators became the repositories of this knowledge and held an accumulated experience that was as vast as it was hard to classify. As a result, it was difficult to pass the knowledge and experience down from one operator to another, like how to assess the quality of a machining operation or the level of wear of a tool from the sound emitted by the machine or how to judge the roughness of a surface by passing a finger over it with reliability that was close to - if not better in some cases - than a digital measuring instrument.

Much has changed since then, at least in the industrialized world where labor has acquired more dignity and protection.

What do cars and machine tools have in common?

The history of machine tools and master turners-millers has a lot in common with the history of cars and high-speed racing. 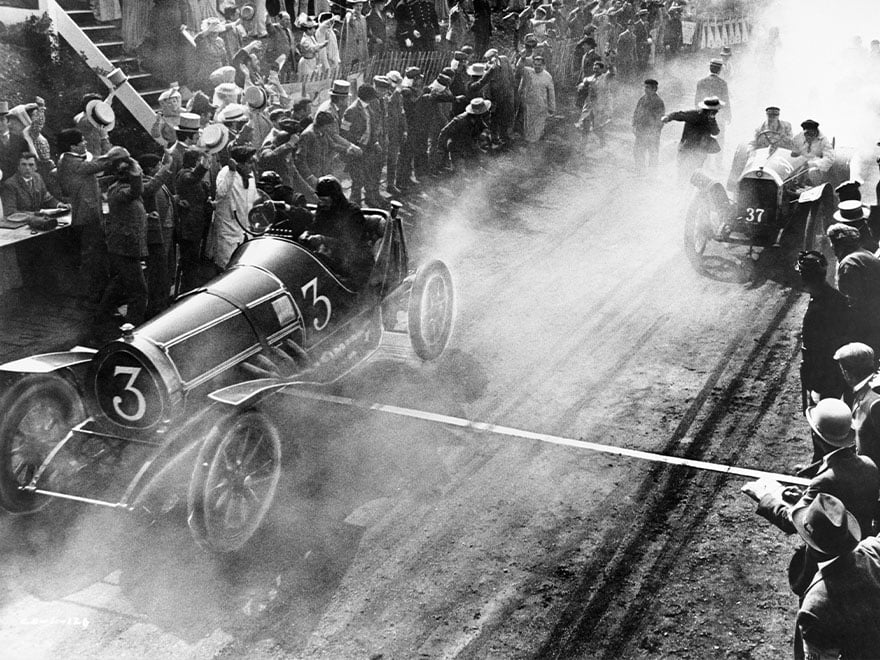 The first cars were essential affairs, made up of a few components whose simplicity mirrored the technology available at the time. Their drivers (not unlike the machine operators) held the most effective lines (made adjustments) through instinct and experience. They also needed to consider every detail in preparing and driving the vehicle.

The first cars for instance were partly made of wood driven by the power of steam. Just like the first woodturning lathes, they were objects of curiosity and considered closer to artistic expression than pragmatic functionality. Their drivers were often seen as eccentric, perhaps just as the rulers who were taught to use the lathe. This parallel continues when considering the cars used in the first races. They were simple vehicles, made up of a few components whose simplicity mirrored the technology available at the time. Their drivers (not unlike the machine operators) held the most effective lines (made adjustments) through instinct and experience. They also needed to consider every detail in preparing and driving the vehicle.

Of course, there were many difficulties. The complete lack of assistance devices, like power brakes, power steering, electronic injection, adaptive suspension, not to mention a large number of sensors that in modern times have become the standard for all and not only on high-performance cars, involved an enormous effort of concentration and therfore a high level of physical fatigue.

Any mistake had fatal consequences for the mechanical equipment and often serious consequences for the drivers. Added to this was the poor reliability of mechanical parts which were subject to breakage or abnormal wear that could compromise the outcome of the race. And then there was the weather and the terrain; all unknown variables that could become risks to the success of the feat.

Little by little, all these variables on cars were studied and gradually brought under control through electronics, automation and software. Today's racing drivers are still a highly talented elite but they are significantly safer. The same can be said of the cars they drive.

The situation is even more obvious when considering standard auto production models. Systems engineered to control stability, braking, distance, lane guidance, attention level and the large number of sensors will soon take us to autonomous driving but already have made everyday driving a much more comfortable and error-proof task.

Reliability is generally well established and maintenance (servicing, oil changes, brake pads), which was required at a greater frequency a few decades ago, is now much more spaced out on today's cars. The need for servicing is also presented well in advance. 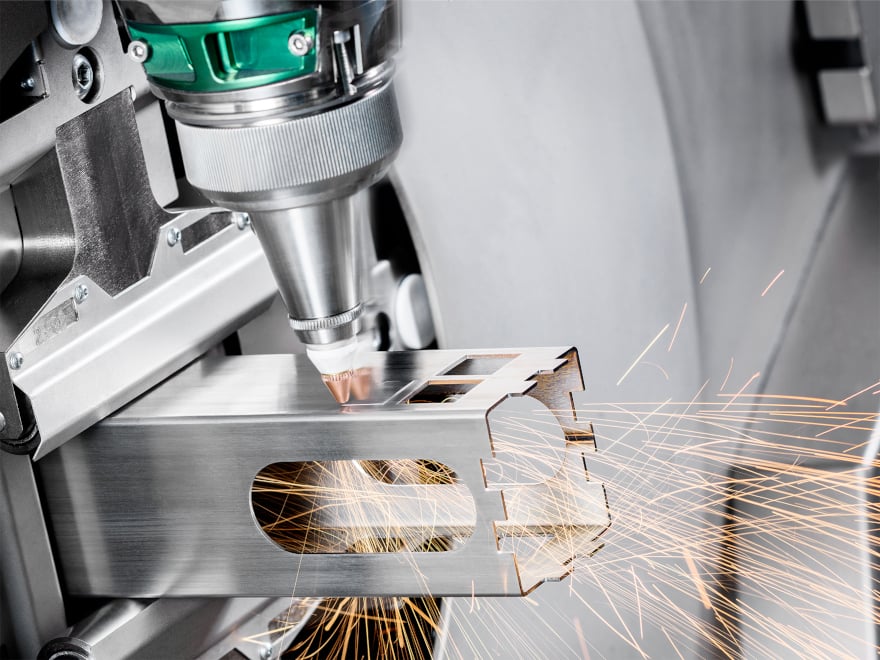 The LT8.20 laser cutting system for tubes and profiles of any cross-section, a top of the range system, automatic, efficient and easy to use.

Why is using a Lasertube system so easy?

The situation for machine tools is very similar, although still restricted to higher-end and higher-performance models.

There has been a shift away from the need to manage a large number of adjustments manually to a level of automation that puts the machine in a position to independently assess the optimum machining conditions: the compensations required by the ambient temperature and humidity conditions, the difference in the quality of the raw material, the degree of wear of the mechanical parts, the right balance between productivity and the quality of the final result.

Operator have been relieved of a great deal of responsibility and no longer run the risk of making fatal errors from minor interventions. The lower level of specialization required for the optimal use of modern machine tools also means that the system can be manned by different operators taking turns over time.

The highest levels of productivity are within the reach of a trained operator using the suggestions and adjustments that the machine offers based on the machining in progress.

This is the case for the top-end machines and the Lasertube systems made by BLM GROUP, where an important role is played, for instance, by the laser cutting parameters (speed, power, assist gas pressure, etc.) automatically suggested by the machine on the basis of the material and thickness to be cut, but above all automatically adapted at every point of the cutting path to avoid burns caused by excessive power or low speed and to avoid losing the cut due to poor power or excessive feed speed. Where these adjustments are not more than robust it is inevitable to settle for inferior results in both productivity and aesthetics
.

There are many other devices and functions that a top-of-the-range system can manage independently so that the operator can do the job more easily and, above all, without requiring special skills or experience.

Of course, maintenance is a burden that remains the responsibility of manual intervention, but here too the latest technological developments have brought great benefits and it is once again a large number of sensors integrated into the systems that make the difference.

Constant monitoring of the working conditions of the laser source and the cutting head by temperature, humidity and wear sensors for all the key components means being able to plan the necessary operations in advance thereby keeping the system in perfect condition.

On the BLM GROUP Lasertubes, the operator receives all notifications of scheduled routine maintenance operations and, if necessary, operating instructions in the form of step-by-step tutorials.

Find out how these aspects are crucial for maintaining a high O.E.E.

The BLM GROUP Lasertube systems allow you to maintain the highest standards of productivity, quality and machine availability.

The only thing left to do is to decide which machining operations to perform, put them in a drawing and send it to the machine.

These operations are also greatly simplified by Artube, the proprietary CAD/CAM by which every machining and machine parameter will be set with the best conditions.

The drawing of a part, made conveniently on a remote workstation in the office, is sent to the machine already in the form of operating instructions. All that remains is to load the whole bars and retrieve the parts already sorted by type in each of the programmed unloading positions
. 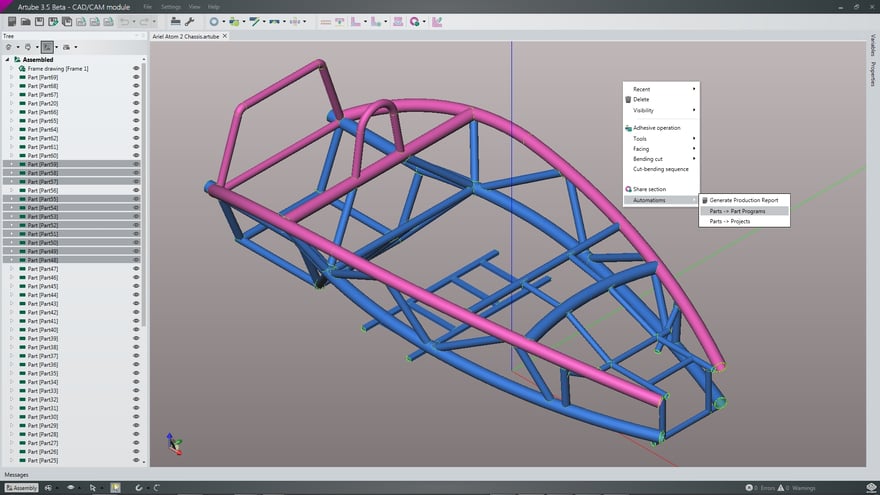 Programming a frame on Artube CAD/CAM.

Progress has brought many benefits, allowing us to move faster and more comfortably every day with increasingly sophisticated and easy-to-drive cars. Similarly, industrial production has become more efficient and cleaner with automated systems capable of achieving high productivity in safe and sustainable working conditions. All this will lead us in time to conditions of greater well-being on all levels and with the hope of a more rational use of our planet’s resources.

How to optimize material usage in tube laser-cutting