Since its establishment 25 years ago in a garage in Kings Lynn, Norfolk in the UK, Optimal Metal Services has followed the relatively simple, yet effective, growth strategy of constantly adding value to the products offered to their customers mainly by continuously investing in new sheet processing machinery for punching, laser-cutting, bending, etc.

This winning strategy has transformed Optimal Metal Services into one of the most important contract manufacturer of steel and aluminum in the UK.

Tubes, the natural choice for expanding your production

After having covered the full range of sheet processing options, tubes were the most natural choice for expanding the processing capacity and giving more to customers.

With an in-depth knowledge of metalworking and a substantial quantity of tubes already in stock, Optimal Metal Services decided to invest over £3 million in a new factory to house a new 3D laser tube cutting system, the: LT8.10.

The reasons for a choice

"A BLM GROUP Lasertube system was the next logical step for us. We estimate that it will generate 10% of the company's turnover in the first year alone."

There are many reasons why Optima Metal Services chose LT8.10.

With the LT8.10 and an extensive stock of metal tubes, Optimal Metal Service can slash delivery times to customers to just two days.

Before purchasing the LT8.10, they were forced to subcontract tube processing with lead times of up to five weeks.

They can now show the new potential acquired with LT8.10 by inviting customers directly to their factory to see the sample piece being made just in time before their eyes.

The purchase of a next-generation Lasertube system was also a strong affirmation of the degree of innovation of Optimal Metal Services, which is crucial in today's market.

Cutting of stainless-steel round tube made with LT8.10.

The cost-effectiveness of laser

A Lasertube is an ideal system for entering the world of tube processing because a single Lasertube system can cut to size, drill, mark and create any geometry on tubes. A Lasertube can replace all the dedicated machines and eliminate semi-finished products to be handled and stored. 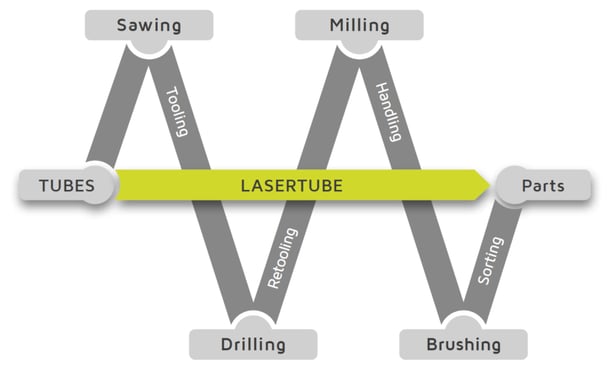 LT8.10 is the Lasertube system with the widest working range.

With this system, you can cut 3D laser tubes of any section – round, square, rectangular, special and open from 12 mm to 240 mm in diameter and up to 12.5 m in length.

The repeatability and accuracy of the manufactured parts are superior, making it possible to speed up the final assembly of supports, fittings and welded joints.

For Optima, the Artube CAD/CAM programming software was fundamental in making the final decision to invest in the LT8.10.

The most popular functions:

Like all other Lasertube systems, the LT8.10 can be equipped with Active Tools. These special features gather all the expertise of BLM GROUP so you can get the best results right away, faster, in any condition and regardless of the operator's experience.

With Active Tools, Optimal Metal Services can automatically solve common problems that arise in laser tube cutting, such as:

With a large inventory of tubes, extrusions and sections, a new Lasertube LT8.10 and a partner such as BLM GROUP UK, the subsidiary of the BLM Group in the United Kingdom, always by their side, Optimal Metal Service is beginning a new chapter in their success story by offering a wide range of value-added tube processing services.

The advantages of laser cutting on welded joint production